In Europe, backing up is BIG. So big that many magazines’ new-boat reviews rate each vessel’s ability to handle under power-in reverse. The reason? Mooring Mediterranean-style–deploying an anchor off the boat’s bow and tying stern lines to a town quay–is de rigueur when sailing in Mediterranean and other European cruising grounds. In high season, with strong crosswinds and with boats packed into small harbors like sardines in olive oil, it can be a daunting prospect. With no finger piers to separate the boats, it’s imperative to set the anchor correctly to secure the boat in position. Although the exercise can be intimidating for sailors who rarely need to dock this way, as with anything else, practice makes perfect.

First, before trying the maneuver in a crowded harbor, practice with your boat in a less confined space. Try dropping the anchor while simultaneously backing down under power, making sternway, to see how the boat handles. You should be comfortable with this process before attempting to Med-moor in a jam-packed harbor.

When you’re ready for the real thing, the first step as you approach the harbor is to prepare lines and fenders and to position crewmembers strategically around the boat. Take note of wind and current. At the stern, have your crew prepare lines port and starboard, making sure they’re led through stern chocks, under lifelines, and clear of any other pulpit obstacles such as barbecue grills or outboard engines. Do a slow circle around the harbor to see where space is available, being careful not to foul rodes of boats already docked. Check to see whether you’ll be tying to bollards or cringles (large metal rings) on the quay. If there are bollards, use bowlines to form large loops in one end of each line.

Be sure the lines are neatly coiled and in an accessible place so they’re ready to bring ashore. That maneuver requires agility–cringles sometimes are significantly lower than the level of the quay, requiring you to climb down or stretch to reach them. If there are cringles ashore, also be sure your stern person can run the line through the cringle quickly and hand it back aboard or tie a quick bowline. Often this must be done while lying flat on the quay and hanging down headfirst to reach the cringle.

At the bow, appoint one person to operate the anchor windlass and familiarize your crew with the hand signals you’ll use to issue instructions. Amidships, be sure to deploy an adequate number of fenders on the port and starboard side and adjust them, if necessary, as you back in. If you have a large crew, have someone on each side hold a free fender to use just in case.

When you’re ready to begin docking, drop the anchor to about 3 feet (1 meter) from the bottom. To determine depth, in addition to charts, use the Greek/Italian/Turkish Waters Pilots by Rod Heikell (Imray, Laurie, Norie & Wilson); these are excellent and indispensable references when sailing in these waters. Align the boat’s centerline along the position you want on the quay. Before dropping the anchor, look around to make sure you’re not going to foul anyone else’s anchor when yours goes down. A side-setting current or windshift can change the geometry of where the anchor is dropped.

Anchoring distance from the quay depends on the depth and the scope needed to keep the anchor set–but in general, with the boat about three boatlengths from the quay, signal the bowman to release the anchor. When the anchor hits bottom, give a good burst of power in reverse for about 20 seconds to set the hook, then throttle back to idle speed (about 800 to 900 rpm unless it’s very windy) and slowly back the boat toward the dock. (Some skippers find it helpful to face the quay and steer from the forward side of the wheel while doing this). Ideally, your boat should be equipped with at least 250 feet of all-chain rode. Remember that the rode, as well as the anchor itself, will hold the boat’s bow in position.

Continue to release the anchor rode slowly and evenly, maintaining enough tension to keep the bow positioned but not to alter the boat’s speed in reverse. Keep backing straight toward your space (Figure 3). As you proceed, remember that if you don’t maintain a steady slow speed, you’ll lose steerageway. When you’re approximately half a boatlength from the quay, put the boat in neutral but stand by to use bursts of forward power if necessary to keep off the quay. When the boat is about 3 feet from the quay, have your crew deploy your windward stern line by either tossing it to someone ashore or stepping ashore with it 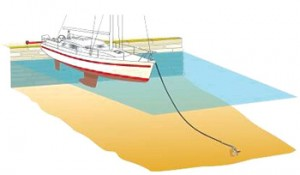 Tarzanesque leaps shouldn’t be necessary; maneuver the boat close enough to the quay so crew can safely step ashore and either throw the prepared line over the bollard or run it through the cringle and bring it back aboard the boat, leading it outside the lifelines and around a genoa winch. (Lines led directly to a winch will cause an override if the quay is higher than the deck; a lead block solves the problem.) Do this quickly, particularly if it’s windy. After the windward line has been secured, deploy the leeward line in the same way. If the lines are looped around bollards, move the onboard, cleated ends to the genoa winches. Use the winches to adjust the lines and your distance to shore, then cleat off. (If you’re in a harbor where there’s no swell to create chafe, it’s preferable to use the same method with bollards as with cringles, running the line around the bollard and back to the boat. Keeping both ends of every line aboard makes departure quicker and easier as no one needs to go ashore to undo lines.) Check your fenders, adjust their positions as necessary, then enjoy your just reward: Drop your gangplank (if you have a steering vane, you can sometimes use it as such), walk ashore, find a nice taverna, and enjoy watching other skippers and crews attempt the maneuver you’ve just successfully completed.

The word “chaos” is from the Greek xaos, and that’s exactly what often ensues when Med-moored boats pick up their anchors and go. In crowded harbors, it’s easy to snag someone else’s chain (or for somebody else to snag yours).

To ensure a dignified departure, position crewmembers as you did on arrival. Start your engine and leave it in neutral while you bring the leeward line aboard. Uncleat the shoreside end of the windward stern line. Motor slowly forward, again at idle speed, and as you do so, quickly bring in the line. If there’s a strong wind from abeam, use a long windward spring line as you motor away. Cleat one end of the line to the boat, lead it around a bollard or cringle on the quay, then back to a genoa winch. Move the boat slowly forward using the windlass and chain, simultaneously releasing the spring line, until you’re clear of neighboring boats. Then get the line quickly aboard and motor slowly forward to retrieve the anchor.

When leaving, the bowman’s job is particularly important; in addition to bringing the chain and anchor back aboard, he or she must direct you at the helm, using the same hand signals as before, as well as point right or left to indicate the position of the rode relative to the boat. Continue to motor slowly forward, trying to keep pressure off the chain (your forward speed should keep it vertical) as the bowman brings it in. The bowman must also look over the side and watch for other boats’ anchors and signal you at the helm to stop if fouling looks imminent. If someone else’s anchor chain is over yours, bring your anchor (and your neighbor’s chain on top of it) as high as your windlass can. Take a piece of line and cleat one end to the bow cleat, run the free end through your neighbor’s chain, and hold the chain up and off your anchor. Raise the chain high enough so you can extract your anchor from beneath, hopefully without causing theirs to drag.

It’s important not to use your propeller at this point; put the boat in neutral and stay put until you’re clear, or your anchor and his chain will be like spaghetti twirled around a fork. Your boat will be held in position by the trip line; once you’re clear, release the line, put the boat in gear, and go. Coil lines and bring in fenders. Raise the sails, enjoy the day, and get ready to do it all again at your next destination.

Back up
x
x